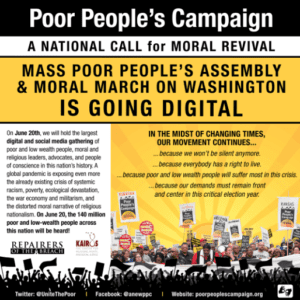 Due to Covid-19 the Mass Poor People’s Assembly and Moral March on Washington was a Digital Justice Gathering to call for a revolution of values to save the soul and heart of our democracy. The political and economic systems in the U.S. are plagued by the interlocking injustices of systemic racism, poverty, militarism and a war economy, ecological devastation and a distorted moral narrative of religious nationalism. Somebody’s hurting our people. It’s gone on far too long, and we won’t be silent anymore.

For a full immersion in the 3.5 hour virtual event go to June2020.org

Enjoy a brief 6 minute video on YouTube: “We Demand” from the Poor People’s Campaign.

He is on fire! Eloquent, poignant, brilliant, he leaves no stone unturned, connecting all the issues plaguing our nation’s moral, social, economic, ecological decline. He rallies us, the wealthiest nation on Earth, to rise up! Fight poverty, not the poor!

A goal of this contemporary movement is to flip the dominant narrative of poverty in America from one that demonizes the poor to one that questions the morality of current public policy and the elected officials who craft it—a status quo in which 140 million people struggle to make ends meet, 54 million people work jobs below a living wage, 14 million are on the verge of not being able to afford their water bills, 4 million are homeless, migrant children are caged at our border, and black families continue to be ripped apart by mass incarceration. Read more at The Nation.