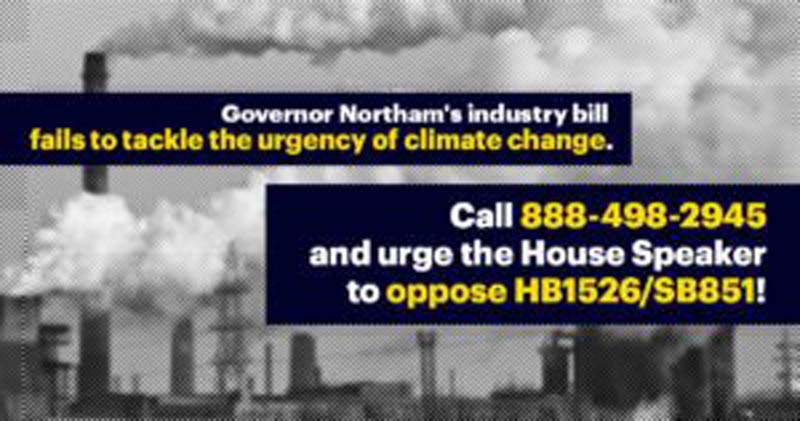 The climate crisis is at our doorstep, so why is Governor Northam pushing bad industry-friendly climate policy? His Clean Economy Act is riddled with industry handouts and loopholes that allow continued dependency on fossil fuels. Don’t let Virginia make a huge mistake for the climate, rate-payers, and frontline communities fighting fracked gas pipelines and gas plants.

The bill could be finalized before the end of this week but House Speaker, Delegate Eileen Filler-Corn has the power to put a stop to this. Virginia is wasting valuable time on a lackluster bill that gives too much sway to dirty energy utilities like Dominion, the company pushing the disastrous Atlantic Coast Pipeline.

The Clean Economy Act is bad for ratepayers and the climate.1 It wouldn’t stop dirty energy pipelines or the proposed fracked gas plant, C4GT, which if built, would be one of the largest in the state. It would commit Virginia to a “100% carbon-free” grid by 2050, which is a deadline experts say is too late to matter. On top of all that, ratepayers would foot the bill for any renewable energy project – even if it fails.

Can you help get us to 50 calls to the House Speaker? Making a call is easy, and it only takes a minute. Here’s how:

Scientists have found we only have 11 years to get our greenhouse gas emissions to almost zero, meaning we can’t accept half-measures. Let’s make every minute count.

See the letter from Friends of Buckingham and our members in Virginia, to Virginia state legislators, expressing our serious concerns with, and opposition to the Virginia Clean Economy Act (SB 851/ HB1526).
VACEA FoB comments 2-26-20

Also, the action letter we sponsored last week along with other organizations, is still active. At the last count, we had 112 folks who sent the email action letter to the the entire VA General Assembly. If you have not – please send now!   Thank you!