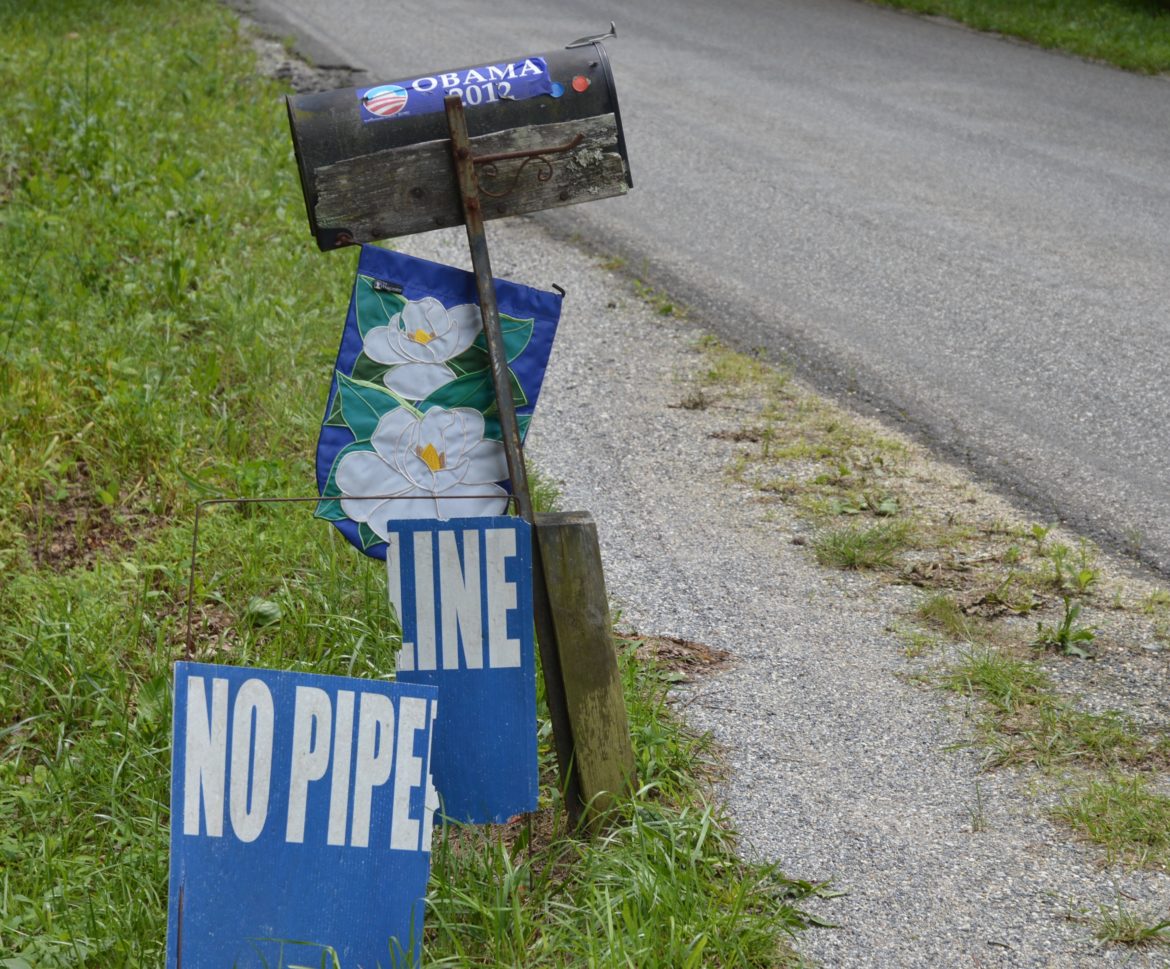 A broken “no pipeline” sign rests outside a home in Union Hill, where residents are divided over Dominion Energy’s plan to build a compressor station for the utility’s Atlantic Coast Pipeline.

UNION HILL, Va. — Richard Walker never misses an opportunity to broadcast what he calls his $64,000 question.

Last Friday was no different.

“How can we have a community solar program here where we save everybody money?” the burly 61-year-old boomed to an audience of more than 30 renewable energy enthusiasts gathered in Union Grove Missionary Baptist Church’s basement Fellowship Hall. “Is somebody going to answer that?”

Not yet, but perhaps soon.

Neighbors in this tiny rural community 70 miles west of Richmond have fractured over Dominion Energy’s plan to build a compressor station on wooded acreage off Highway 56. It’s a crucial piece of infrastructure for the giant utility’s Atlantic Coast Pipeline, which would bisect Virginia for roughly 300 of its 600 miles to move hydraulically fractured natural gas from West Virginia to North Carolina.

“We’re family, and we’ve allowed Dominion to let us have a family feud,” Walker said. “We’re going to have to agree to disagree — without animosity.”

The human rift over the fossil fuel project gnaws at his heart because eight generations of his family have called Union Hill home since free blacks and former slaves settled in Buckingham County after the Civil War.

Walker, who lives in Richmond, views a united effort toward solar as an energy balm that could heal a schism that has deepened over the last five years as the pipeline — now on hold — has dominated the conversation.

Instead of waiting for a solar Superman to soar into Union Hill, the mental health counselor cobbled together a program through his longtime nonprofit, Bridging the Gap in Virginia.

A grant from the Mertz Gilmore Foundation allowed Walker to issue $1,000 scholarships for 10 area residents to immerse themselves in a weeklong solar boot camp with a professional trainer. The training ended Friday with a celebratory fish fry outside the church kitchen.

The intensive course went far beyond the ABCs — amps, batteries and converters — of solar and included a visit to a nearby array of installations at Yogaville, a spiritual center on the banks of the James River.

“I’ve become an environmentalist,” Walker said about his pursuit of renewables. “I’m fighting on behalf of Union Hill households because we’re not going to allow Dominion Energy to come in and take advantage of what’s primarily an African American community.

“Divide and conquer, that’s what Dominion did. They dangled money and got some people to side with them.”

Dominion did not respond to a request for comment for this article.

Before the class began June 10, Walker had arranged to equip the church with Wi-Fi, which is still a luxury in remote regions.

That connection links to his idea to turn Fellowship Hall into a community hub that welcomes everybody. His nonprofit also donated desktop computers to that cause.

“I’m trying to reunify the community,” he said about his digital olive branch. “Most everybody here is related by birth or marriage.”

Personal struggles motivated Walker to start Bridging the Gap 10 years ago as a job conduit for Virginians wrestling with addiction, incarceration and chronic homelessness.

“I came out of prison and I couldn’t get a job,” he said about the concurrent, two-year federal and state sentences he served for cocaine possession and fraud. “And I had a four-year college degree.”

Watching yet another minority community — his own — be saddled with fossil fuel infrastructure motivated him to fold green workforce development and environmental justice into his nonprofit’s mission. Backers include the Virginia Environmental Justice Collaborative, Virginia Interfaith Power & Light and programs under the University of Richmond umbrella.

The Solar 101 class taught by Sean White, a Californian with decades of international training experience, attracted a range of participants.

Tatiania Jones, the sole woman, is a registered nurse in the student health care clinic at the University of Virginia. She lives in nearby Andersonville.

While the 34-year-old said she’s leaning toward continuing to climb the nursing career ladder, she noted that “I’ve learned so much this week and it’s all new to me. I’m always up for a challenge.”

Walker, a cousin of Jones’s grandmother, invited her to participate because of her local ties.

“Solar has the potential to bring a lot of jobs and be an alternative to Dominion’s big plan,” Jones said. “The idea is to educate the community about what’s possible.”

Anthony Couch traveled 45 minutes from Farmville to attend the training. The 35-year-old is restless after six years as a warehouse associate.

“The main reason I signed up was because of the possibility of being certified in a trade,” said Couch, who has an associate degree in business administration. “I just want a different avenue.”

Veteran residential and commercial contractor Andre Massenburg arrived at the training eager to soak up the vocabulary and nuances of the solar business.

“This is the wave,” he said. “Let’s become masters of it because it’s going to be our edge.” The 58-year-old dropped out of college a few credits shy of a science degree years ago when he earned what seemed a princely sum for a paint job.

Construction Services, his Richmond company, is including a classroom in its new manufacturing center so employees can receive solar education.

Now that solar panels are more affordable, he has a keen interest in outfitting new homes with rooftop arrays because the millennial generation is so educated about the savings on utility bills.

“People say solar is only for retrofits because you need a history of a building’s electricity bills, but I say let’s just do it,” he said. “My outlook is that a door that don’t squeak don’t get no oil.”

Fellow student Sharmar Hill has already selected a name — Sun God — for the solar business he dreams of starting.

“I want to end up in management, be the go-to guy,” said the 39-year-old who lives in Richmond.

When he was in his 20s, he spent two years in a West Virginia prison for distributing cocaine. Like Walker, he struggled to find full-time work after his release.

Hill just started work with a company that does utility repairs. He hopes that experience, plus the HVAC classes he took in prison, will be a foundation for a solar career.

He’s also determined to earn the last few credits he needs to complete an associate degree in electrical engineering.

“This is a chance,” Hill said about the opportunity the training offered. “You get out of it what you put into it.”

A promise to pitch in

Hill and his nine classmates rounded out their training by taking a written test designed by White as preparation for an exam offered for a fee by the North American Board of Certified Energy Practitioners. Passing that gives solar rookies clout.

Walker reminded the new graduates that it’s up to them to pursue solar employment.

“This is called Buckingham, Virginia, not Give Me, Virginia,” he said after each participant received a completion certificate. “We can help you find a job, but we can’t give you a job.”

By accepting a scholarship, each trainee also committed to return to Union Hill to help to eventually install whatever type of solar pilot project makes sense for the community and its utility, the Central Virginia Electric Cooperative. That could be rooftop panels on the church and homes or perhaps a larger, ground-mounted system.

Supporters such as Pastor Paul Wilson and Chad Oba, co-founder of Friends of Buckingham, showed up at the post-training gathering.

“We will be taking it and running with it,” Wilson said about streamlining access to renewables. “This is a very important mission.”

Oba, a 35-year Union Hill resident, said she was delighted by Walker’s commitment to the solar cause. She noted that her small group sometimes feels overwhelmed after fighting the pipeline and compressor station for almost five years.

“Our ultimate goal is to have all of the pipeline permits rescinded because they relied on incorrect data,” Walker said.

He’s encouraged that 28 Democratic state legislators and the Virginia NAACP voiced support this month for yet another pipeline lawsuit, this one challenging the Virginia Air Pollution Control Board’s decision to approve a permit for the compressor station. The Southern Environmental Law Center filed that one in February.

Though Walker grew up in East Orange, New Jersey, he spent childhood summers in Union Hill on properties his ancestors purchased. Arthur Harper, Walker’s great-grandfather, paid $25 for 25 acres in 1916. Taylor Harper, another relative who was a freed slave, bought 27 acres in 1885 for $15.

Investing in solar sends a message to Dominion about sticking together, Walker said:

“It says that we’re not going to allow you to run roughshod over the community. We don’t need your money to move forward.”

Elizabeth is a longtime energy and environment reporter who has worked for InsideClimate News, Energy Intelligence and Crain Communications. Her groundbreaking dispatches for InsideClimate News from Kalamazoo, Michigan, “The Dilbit Disaster: Inside the Biggest Oil Spill You Never Heard Of” won a Pulitzer Prize for National Reporting in 2013. Elizabeth covers the state of Virginia.