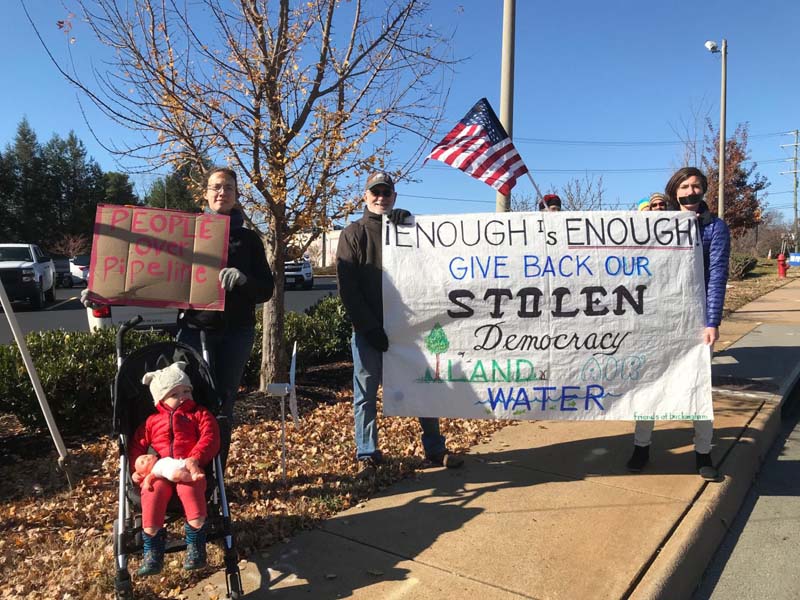 CHARLOTTESVILLE — Chad Oba huddled on a narrow median strip, bundled against the falling snow. Passing cars honked at the sign she was holding, and behind her a crowd of fellow protesters chanted outside the local office of Dominion Energy as police stood watch.

For four years, Oba, 71, has worked to prevent Dominion from building a natural-gas compressor station near her home in rural Buckingham County. It’s always been a long-shot quest, going up against the most powerful corporation in Virginia.

Now, just as the matter is about to come to a head next week over a crucial state permit, Oba and her fellow protesters face a new obstacle: Some neighbors are speaking out on behalf of Dominion.

They have been swayed, in part, by an unprecedented $5.1 million “community investment package” offered by the utility to the few hundred people in the area known as Union Hill. Dominion has promised to build a community center, buy an ambulance, improve local 911 lines and more.

It’s a powerful inducement in a place with a difficult history, a remote area settled by free blacks and emancipated slaves after the Civil War. Dominion bought the compressor-station property from white descendants of a former plantation family. Unmarked graves of African American laborers are scattered throughout nearby woods.

However, the money has done what it usually does when injected into a volatile mix of strong feelings, racial tension and fear of change: It has sharpened divisions.

Oba, who is white, has helped lead an unlikely coalition of black Baptists, environmentalists and yogis from the nearby community of Yogaville to fight the compressor station. To them, Dominion’s package is an 11th-hour tactic to buy off concerns about environmental justice.

“Dominion is coming in and bribing the community with money,” said Heidi Berthoud, who protests with Oba’s group, called Friends of Buckingham County. “We said no, we don’t want it, period, and we’re going to do everything we can to fight it.”

Other residents — black and white — see the money as a sincere offer of help.

Craig White, 54, grew up in Union Hill but now lives in Maryland. He was initially opposed to the compressor station, part of an extensive billion-dollar pipeline project, because it would be adjacent to land he bought with the idea of developing houses to sell.

Then Dominion made him an offer: It would lease the land for an RV park to house workers building the pipeline and compressor station.

Now White, who is African American, says the protesters are misguided.

“Even in protest, you have to be able to have a business discussion, and what we’ve found in the community is there are a lot of people who can’t separate the two,” White said. “They are just one-track: protest, protest, protest at all costs.”

The topic is uncomfortable even within White’s family. His father, Charles White Sr., still lives in Union Hill. The elder White wrote a book about the county’s black history and has long opposed the compressor project. Yet, he doesn’t begrudge his son for making the best of the situation.

The compressor project is “a threat,” the senior White said. “I go to the meetings and take part. I wish the thing weren’t coming. But . . . it’s coming, and we might as well get ready for it.”

Corporate vs. community
As chief counsel for Dominion, Carlos Brown is not usually involved in community outreach. But he said that as an African American, he felt compelled to weigh in on the Buckingham project earlier this year.

“We began to hear concerns of those in the community, especially those in the African American community, who were raising questions of why we were putting the station where it was,” Brown said. He said he wanted Dominion to “be sure we are challenging ourselves to be the best we can be . . . in areas where industry has not always been sensitive.”

So Brown began making trips out to Buckingham — approximately 90 minutes west of Richmond — to meet with residents.

Dominion has pulled out all the stops to push the compressor station, which is part of the $7 billion Atlantic Coast Pipeline, a 600-mile project carrying natural gas from West Virginia, through Virginia and into North Carolina. The compressor keeps the gas flowing. Such facilities can be controversial because they can emit noxious gases, produce loud noises and — in rare instances — explode.

Earlier this year, when a similar facility was proposed across the Potomac from Mount Vernon, advocates for George Washington’s home objected. Virginia Gov. Ralph Northam (D) expressed concern, and Dominion quickly pledged to find another location.

The company argues that relocating the Buckingham County site is not possible because the station needs to intersect with an existing pipeline — the Transco — and the 68-acre Union Hill parcel was the only one in the right spot with a willing seller.

The utility worked with Buckingham County’s government to secure site permits long before statewide attention focused on the project. Dominion, the state’s largest corporate political donor, also mounted a years-long public relations campaign to build support for the pipeline among its thousands of retirees and shareholders, as well as lawmakers. State officials say the permitting review for both the pipeline and the compressor station is the most stringent Virginia has ever applied.

But in the spring, a state Advisory Council on Environmental Justice appointed by then-Gov. Terry McAuliffe (D) took up the issue, eventually issuing a letter blasting the project and calling on Northam to intervene.

Shortly after the advisory panel met with Buckingham residents, Brown started his community outreach on behalf of Dominion. He and others held more than two dozen meetings throughout the summer and fall with large groups and individuals. The utility hired Basil Gooden, a former state agricultural secretary who grew up in Union Hill, as a community liaison.

“We said we need to make sure we make it right. We have to realize our elbows are sharp,” Brown said. “Then we got excited that this could actually be a new model . . . for how you engage a community.”

He didn’t want to “appear to be transactional,” Brown said, but he wanted to see if Dominion could help solve “the true needs” of the community. That’s how he and the residents came up with the $5.1 million package of improvements, focusing on a community center and public safety.

“They’d probably prefer to have no disruption,” Brown said. “But the issue around environmental justice is not about whether something happens or not, it’s about how it happens. . . . I feel proud to say I know that whatever the trajectory was, that we have been able to make a significant course correction.”

Some residents who met with Dominion were also attending gatherings held by project opponents, often at one of two Baptist churches in the heart of the community — Union Hill and Union Grove. Tempers flared as a few people began to waver in their opposition.

Paul Wilson, a pastor who divided his time between the Union Hill and Union Grove churches, has been the figurehead of the opposition movement. In recent weeks, though, the two churches have split and Wilson now serves only Union Grove. Residents say tensions over the Dominion deal aggravated long-standing differences and contributed to the rift.

Joyce Gooden, 68, moved back to the family farm earlier this year. She is the sister of Basil Gooden, Dominion’s paid liaison, but said she was initially skeptical of the compressor project. As she came to appreciate the company’s willingness to invest in the community, she said, the hardcore opponents grew upset.

“They have been rude to me, rude at meetings. They have shown up when they have not been invited and then proceeded to try to take over the agenda of the meeting and try to change it into a protest meeting,” Joyce Gooden said.

Some who signed on with Dominion’s investment plan — and the utility submitted dozens of signatures to state regulators as a sign of community support — say they don’t actually want the compressor, they just see it as inevitable.

“If it has to be here, we should try to do what we can to make the best of a bad situation,” said Gerald Washington, 62, who lives in the town of Dillwyn but whose daughter lives on the old family farm in Union Hill. “How can the community benefit from Dominion being here?”

He resents the idea that the $5.1 million is a bribe. Dominion “could’ve just built this thing and said, ‘The hell with you,’”  he said.

Washington, who retired as the warden of the Buckingham Correctional Center, said he’s seen this kind of outcry before — when the state first proposed building the prison.

“It may even have been worse than this,” he said. “Nobody wanted it. They protested and did everything else.” But once the prison was open and brought jobs and income, residents welcomed construction of a second correctional facility, he said.

Opponents of the compressor station worry that their neighbors’ willingness to accept Dominion’s deal is a heavy blow to their cause. The state Air Pollution Control Board began considering the compressor’s crucial air permit early last month and delayed the vote after members expressed concern that the environmental justice issues had not been addressed.

That delay caused another type of drama — Northam replaced two of the skeptical board members in the interim, sparking accusations that he was tampering with the process to help Dominion, which donated to his gubernatorial campaign. The governor responded by saying the two new members will not vote next week. The vote, originally set for Monday, was rescheduled for Dec. 19 because of Sunday’s snowstorm.

Opponents have launched a flurry of last-minute demonstrations around the state, including an all-night vigil planned in Richmond on Sunday night. Over the weekend, residents sent a protest letter with 100 signatures, including those of celebrity activists such as Karenna Gore and actors Don Cheadle and Ed Begley Jr.

Oba, the protest organizer, said that even if the effort fails, some good may come of it.

Dominion’s willingness to spend on the community “is because we’ve raised these issues,” she said. “The minute this was identified as environmental justice . . . they showed up.”

Oba said she doesn’t blame those neighbors who want to jump at the deal.

“Dominion has done such a good job of convincing people that this is inevitable,” she said. “So it’s understandable that they would, you know, start to move toward ‘let’s try to get something from this.’ ”

Washington Post December 9, 2018
Gregory S. SchneiderGreg Schneider covers Virginia from the Richmond bureau. He was The Washington Post’s business editor for more than seven years, and before that served stints as deputy business editor, national security editor and technology editor. He has also covered aviation security, the auto industry and the defense industry for The Post. Follow