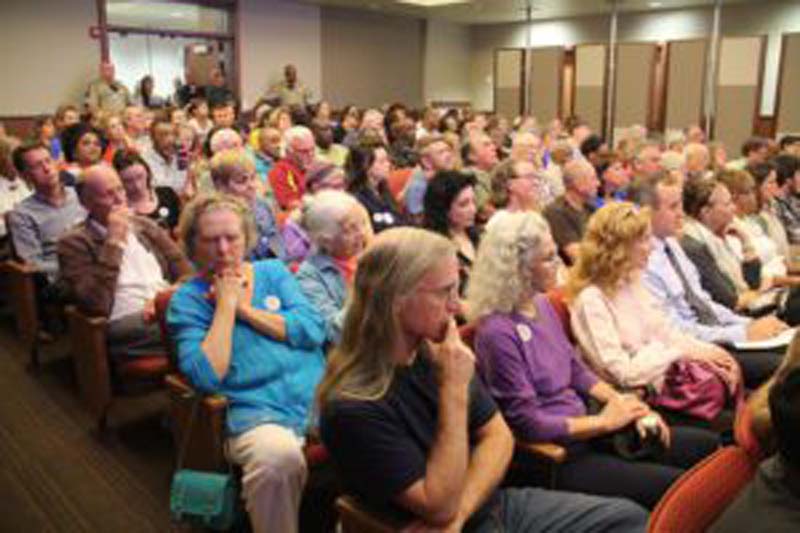 Three weeks ago, something incredible happened. The community of Buckingham came together to say a resounding “no” to Dominion’s proposed 53,515-horsepower fracked-gas compressor station.
More than 150 people packed the room at a Buckingham County Planning Commission hearing on September 26th. Dozens testified to the project’s health, economic and safety impacts. So many people turned out, in fact, that the Planning Commission had to cut off testimony at 10:30 PM and schedule a second hearing this coming Monday, October 17th.

Join us Monday at 5 PM. Add your name to the growing list of community members saying “no” to Dominion’s plans.

Dominion and its partners are seeking a special use permit for a four-turbine compressor station as part of the proposed 600-mile Atlantic Coast Pipeline for fracked-gas. The station would be located on Route 56 between Union Hill and Shelton Store Roads in a historically African American neighborhood.

A compressor station of this size would be a massive new source of pollution and noise, regularly emitting toxins into the air and threatening the health and safety of nearby residents. But, without the compressor, Dominion can’t build its pipeline.

The Commission will recommend whether or not the Buckingham County Board of Supervisors should approve Dominion’s permit on October 24th, making this Mondayour last chance to make our voices heard before they vote.

Join us Monday for an evening of singing, testimony and activism to stop this dangerous compressor station.

On September 26th, not a single person spoke in favor of Dominion’s project, and the Planning Commission members said it was the largest meeting they had ever seen. That day, we showed the commissioners that the community of Buckingham is united against this compressor station and the 600-mile pipeline it would support. Let’s do it again this Monday!

For a fossil-fuel-free future,