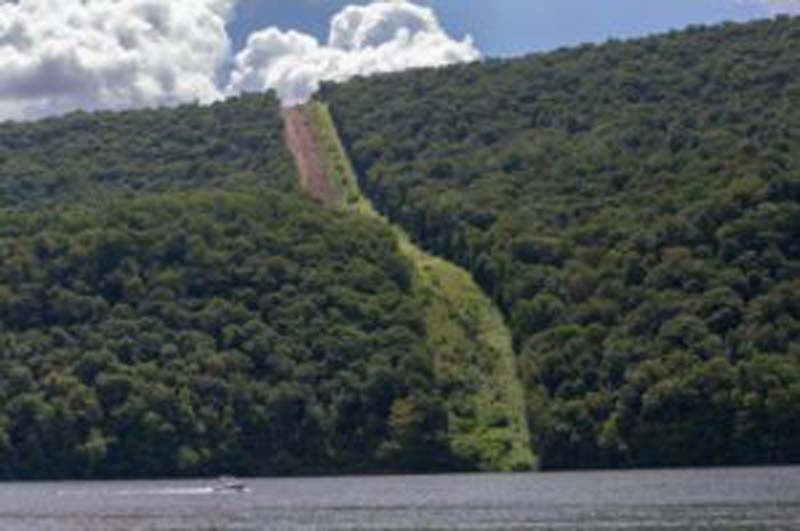 Construction of the Mariner East 2 pipeline, seen here in Huntingdon County, may be linked to water problems in some households in Chester County

Around a dozen Chester County households experienced cloudy water or loss of supply from their private wells this week, forcing some families from their homes near a location where Sunoco Pipeline is conducting horizontal directional drilling about 150 feet below ground for the construction of its Mariner East 2 pipeline.

Five families spent Wednesday night in a local hotel, and three of them spent a second night on Thursday away from their homes because of the water problems, according to the company, which supplied bottled water to affected homes.

Sunoco spokesman Jeff Shields said the company is investigating the cause of the water problems in West Whiteland Township, which were first reported to the Township on Monday. The company is now a subsidiary of Energy Transfer Partners.

The company has tested 11 private water wells, and was due to test another nine on Friday to determine whether its horizontal directional drilling (HDD) caused the water problems, Shields said. Although test results had not been given to West Whiteland Township officials by late morning, Shields indicated that HDD was the cause.

“I wouldn’t speculate on other possible causes,” Shields told StateImpact. “We will take care of the residents as if it’s our issue, unless evidence shows otherwise.”

Shields said he didn’t know how many households were affected in total because some had “genuine problems” while others were being tested as a precaution. “The families that have reported specific conditions range from cloudy water to a loss of water supply,” he said.

Sunoco suspended the drilling, which had been taking place between West Whiteland and Uwchlan Townships as part of the pipeline construction.

George Turner, a township supervisor, said he expects the tests will show that the water in the affected homes was turned cloudy by bentonite clay, a non-toxic substance used as a lubricant in horizontal directional drilling.

“I don’t think it’s going to be any surprise, they are going to say that the water’s cloudy and it’s got bentonite clay in it.” Turner said. He expects Sunoco to disclose the test results to township officials on Friday afternoon.