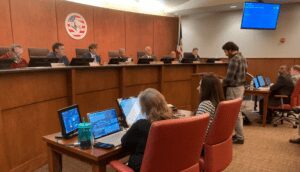 Brian Carlton, Editor of the Farmville Herald, has been following the gold mining issue closely. In 2 articles last week, he follows the formation of the gold mining committee by the Buckingham Board of Supervisors. The committee was approved at the 12-12-2022 Board meeting. The membership issue has been very problematic, as the Board wants to limit the size of the committee (and thus public participation). Jeeva Abbate, originally approved for the committee, resigned when he heard he was the only participant besides the 2 supervisors, Harry Bryant (district 5) and Jordan Miles (district 4).

Informed and concerned residents spoke up at the 1-9-2023 Board meeting, asking for 4 people to be approved for the committee: Kenda Hanuman, Pete Kapuscinski, Gerry Sackett, and Heidi Dhivya Berthoud. We were told we had to choose one of us. Heidi Dhivya was chosen, as her focus has been on the local rights-based ordinance, which is what we want the supervisors to adopt.

Brian goes into more detail in the 2 articles posted in the Farmville Herald:

An important correction for the January 12 article: At the top of page 2, Brian brings up the issue of “Prove it First”, saying it has not been proven in court. Oh contraire!

We found out about this law from an international consultant we turned to for the state study – biophysicist Steve Emerman. Steve also reviewed the rights-based ordinance that Buckingham residents wrote with the help of Ben Price, of the Community Environmental Legal Defense Fund (CELDF). Minnesota is working to adopt this law statewide, having witnessed the success of Wisconsin, which had the law in place for 20 years. Not one copper-sulfide mine was permitted during that period. Unfortunately, industry-friendly Governor Scott Walker took that protective law down. Such is the nature of life – ever changing. We need to maintain perennial vigil.

This site uses Akismet to reduce spam. Learn how your comment data is processed.