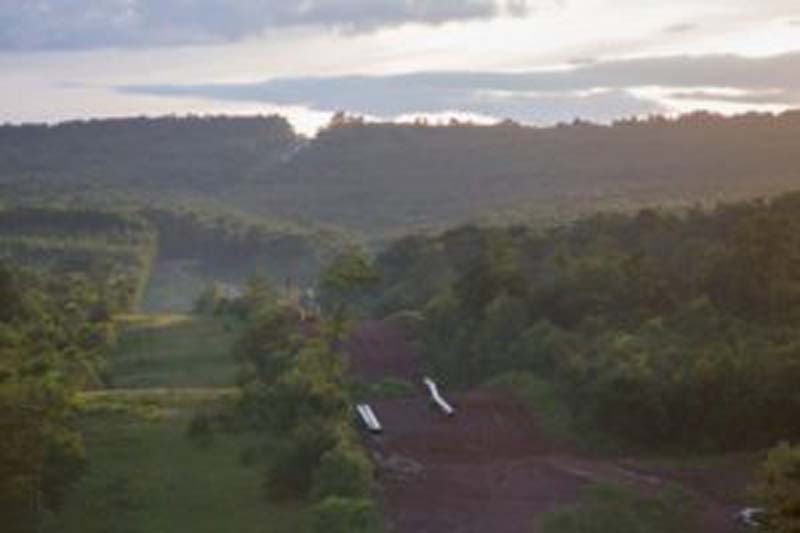 Construction of the Mariner East 2 pipeline in Huntingdon County, Pennsylvania.

Two ranking Democrats in Congress have asked the Federal Energy Regulatory Commission (FERC), to further investigate the practices of pipeline builder Energy Transfer Partners, which has merged with Sunoco Logistics, after spills and permit violations occurred on two of its major projects in three different states, including the Mariner East 2 pipeline here in Pennsylvania.

In a letter to FERC last Thursday, Congressman Frank Pallone Jr., and Washington state Senator Maria Cantwell, detail recent spills in Ohio, West Virginia and Pennsylvania, and criticize the company for misleading regulators by destroying an historic home in Ohio. StateImpact reported recently on a judge ordering ETP/Sunocoto stop construction on a valve station in West Goshen Township, where the company began building a valve station at a location the township had not agreed to.

We first heard about problems with Chester County water July 4th weekend, when we got several emails telling us construction of the Mariner East 2 pipeline had polluted well water. When we went to check it out and knock on doors in West Whiteland Township, we found David Mano, and his fiancé Dianne Salter in their backyard pool.

Mano says he didn’t even know about the pipeline construction until a neighbor called and told him to check his well water.

“Which I did Wednesday evening when I came home, and my water was light brown, full of sediment,” he said.

Sunoco, which recently merged with Energy Transfer Partners, is building the more than $2.5 billion dollar pipeline to carry natural gas liquids from the Marcellus Shale fields to an export terminal in Marcus Hook, Delaware County.  The company is also building other pipelines across the country, including the Dakota Access pipeline, which native Americans opposed.