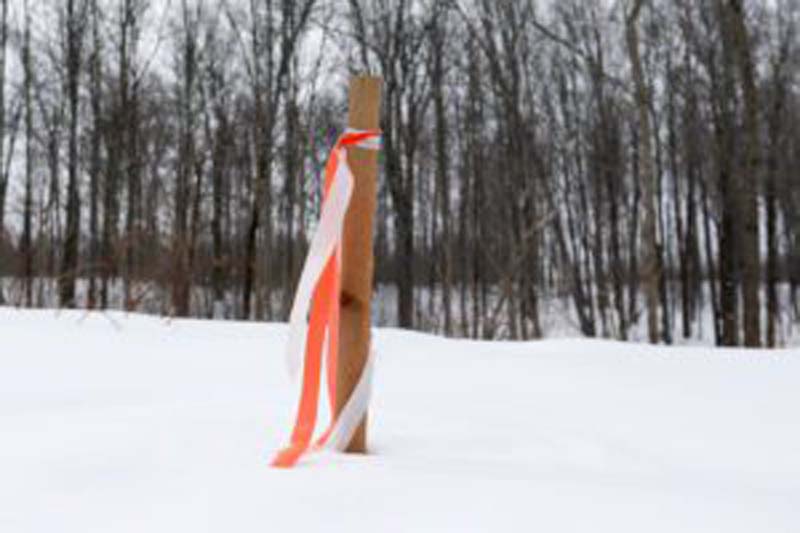 In this Thursday, Feb. 26 photo, a ribbon tied to a stake on Kernan family property marks the proposed path of the Constitution Pipeline in Harpersfield, N.Y. The developer of a 124-mile-long pipeline to bring Marcellus Shale gas from Pennsylvania to New York City and New England is using both carrot and stick to achieve its goals. (AP Photo/Mike Groll)

A federal appeals court ruled against the Constitution Pipeline Friday, in a challenge it brought against New York State’s denial of a water quality permit.
The decision is a major blow to the embattled project, which was planned to run 121 miles, carrying natural gas from the Marcellus Shale in northeastern Pennsylvania through New York State.

Last May the Constitution Pipeline sued to overturn the permit denial from New York’s Department of Environmental Conservation, which halted the federally-approved project.

U.S. Court of Appeals for the Second Circuit sided with the state, saying it acted within its authority to deny the permits.

The project also attracted criticism in Pennsylvania, particularly after the company began clearing trees on private land, while under protection of armed federal marshals. Lynda Farrell of the Chester County-based Pipeline Safety Coalition says the pipeline industry had grown accustomed to assuming a project would move forward after it gets federal approval.