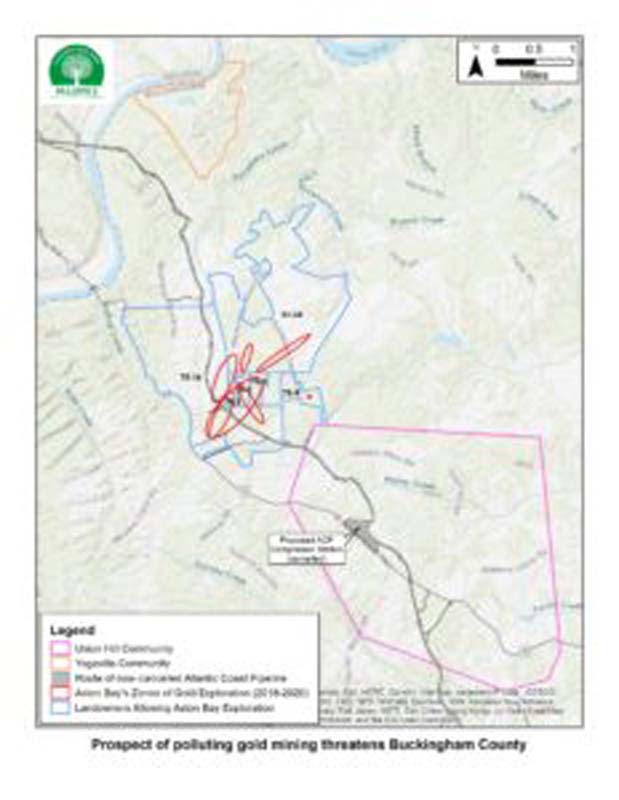 Friends of Buckingham is alerting you to an urgent joint meeting with the Buckingham County Board of Supervisors and the Planning Commission. The meeting will take place on Tuesday, October 13 at 6 pm. Our county officials will be discussing changing an ordinance that would allow a Canadian gold mining company to drill in an A-1 agriculturally zoned part of the county. See links to digitally attend the meeting or make a public comment.

Open-pit gold mining is one of the dirtiest, most harmful extractive industries in the world.

Many residents in the area do not even know about the possibility of this locating near their homes.

Ask the Planning Commission and Board of Supervisors to say NO
to the Zoning Text Amendment that would allow for gold mining.

What we have learned so far:

Since at least 2016, a Canadian mining company, Aston Bay Holdings has been exploring the potential for extensive, open-pit gold mining in Buckingham County. Currently, the company has already drilled exploratory holes on land situated between Union Hill, Yogaville and other vulnerable communities. Other Buckingham County locations are also being targeted. Gold veins run elsewhere in Buckingham County and in fact, through much of Central Virginia. Aston Bay’s website notes that the company “has signed agreements with timber and land companies which grants the company the option to lease the mineral rights to 11,065 acres of land located in central Virginia.”

Gold mining historically occurred in Buckingham County, with prospectors using pick-and-shovel. But with modern technology, gold mining involves drilling deep into the Earth, producing massive amounts of waste rock, tainted with dozens of compounds that, when exposed to the elements, can easily leach into the water table, streams and rivers. The waste may contain as many as three dozen toxins including mercury, arsenic, cyanide, lead, acids and petroleum by-products — and many of these leach into water sources.

We are especially concerned about what the waste toxins from this drilling and mining would do to our streams and the shallow residential drinking-water wells in the area. We have additional concerns about noise, air pollution, risks to workers and increased industry traffic.

Exploratory drilling is the first step in creating the mining. And it’s not just gold they could mine … there are many other minerals like copper, lead, and zinc that they are targeting.

We question why our county representatives would even consider such a polluting industry to operate in an area of the county that just spent six years fighting to protect their homes and farms from the massive Atlantic Coast Pipeline and the related Compressor Station. The Environmental Justice impacts were made visible then on a state and national level. This Environmental Justice, low-income and  predominately African-American community should not be once more targeted for a highly polluting industry.

Company representatives from Aston Bay reported that they had completed their exploratory drilling to the Planning Commission meeting in July, (58 minute point). However, during the September 21 joint meeting, Planning Administrator Nicci Edmondston stated that the company made a request to come back for more drilling. She has notified Aston Bay that they have been in violation of county ordinances and they may not drill. That has triggered the current review and possible ordinance amendment that would allow for such exploratory drilling. The county is proposing to add a “zoning text amendment to the list of Special Use Permits in an A-1 agricultural district to allow core sampling for commercial use.” This makes no mention that the ordinance change is to accommodate a specific company, nor that it is for a use as intensive as gold mining or other types of mining.

Gold mining impacts on land, water and air are devastating in addition to being highly energy intensive with tons of hazardous waste being produced and emptied into our localized environments. Allowing the exploratory drilling is just the beginning of opening the county doors to open pit gold mining.

Are you informed enough about this project?

Should Buckingham County change our laws for a company that has been violating them since 2016?

Is Buckingham County ready to protect our health and safety from gold-mining impacts?

Do we really need this for Buckingham County?

Please join us for the joint Supervisors and Planning Commission meeting October 13 — either virtually or in-person — and make your concerns known.