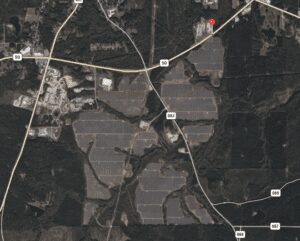 Thanks to Scott Flood for this article and keeping us alert to these pressing concerns. On November 14, 2022, EPA  and DOJ announced 1.34 million in settlements to resolve Clean Water Act violations at four large-scale solar construction sites in Alabama, Idaho and Illinois.

Below is information in two sections.

Scott:  Here in Virginia, we will see massive construction coming to the Seven Islands area of the James River. Thousands of acres of land disturbance by the industrial solar facilities in Buckingham and Albemarle.

Friends of Buckingham: We support sustainable, regenerative community solar projects. Industrial solar seems to be killing the planet under the guise of saving it. 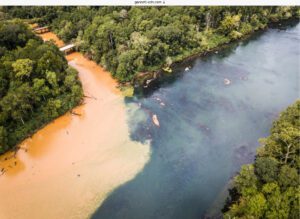 This drone photo captured the large plume of muddy water flowing into the Chattahoochee River from AL Solar A, one of the four solar facilities involved in the EPA action. The industrial solar facility is many miles away from the Chattahoochee, yet the pollution is severe. (Riverstone is just 1/4 mile from the James).

“A lot of people don’t realize that sediments, dirt that comes off our earth’s surface and our construction sites when it comes in large quantities, is one of the most damaging types of pollutants into our river systems,” Ulseth said. “Not only does it cause a lot of environmental harm in terms of harming ecosystems, fish and invertebrate reproduction, but it also causes a lot of economic harm.”

Note:. The drone photo a was taken near West Point, GA. The solar facility is near Lafayette, AL. According to Apple Maps, the drive between the two cities is 13 miles. This journey is farther by water!
Link to pin at facility in following map:
https://maps.apple.com/?ll=32.885882,-85.380624&q=Dropped%20Pin&_ext=EiYp0K9S1+FwQEAx0LoVKr5YVcA5ToV4MwhyQEBBgPDS5Q5YVcBQAw%3D%3D&t=h 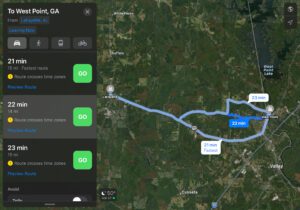 Next up is the news release from the EPA.

“…the solar energy industry must comply with the Clean Water Act,” said Assistant Attorney General Todd Kim of the Justice Department’s Environment and Natural Resources Division. “The proposed settlements demonstrate the Department of Justice’s commitment to require those developing these facilities, including the site owners, to comply with the law, or be held accountable for construction practices that put our waterways at risk.”

These four solar farm owners are all subsidiaries of large international finance and investment companies, and all four used a common construction contractor for the development of their solar farms. Together, the four settlements with these defendants secure a total of $1.34 million in civil penalties and ensure that remaining construction will take place in compliance with Clean Water Act stormwater permits. The settlements resolved claims alleged in four separate complaints the government also filed today.

“The development of solar energy is a key component of this Administration’s efforts to combat climate change,” said Acting Assistant Administrator Larry Starfield of the EPA’s Office of Enforcement and Compliance Assurance. “These settlements send an important message to the site owners of solar farm projects that these facilities must be planned and built-in compliance with all environmental laws, including those that prevent the discharge of sediment into local waters during construction.”

“While the development of renewable energy holds great promise for combatting climate change, the solar energy industry must comply with the Clean Water Act,” said Assistant Attorney General Todd Kim of the Justice Department’s Environment and Natural Resources Division. “The proposed settlements demonstrate the Department of Justice’s commitment to require those developing these facilities, including the site owners, to comply with the law, or be held accountable for construction practices that put our waterways at risk.”

Solar farm construction involves clearing and grading large sections of land, which can lead to significant erosion and major runoff of sediment into waterways if stormwater controls at the site are inadequate. Increased sediment in waterways can injure, suffocate, or kill aquatic life; damage aquatic ecosystems; and cause significant harm to drinking water treatment systems. To avoid these harms to the environment and public health, parties responsible for construction of solar farms are required to get construction stormwater permits under the Clean Water Act and comply with the terms of those permits. Each of the complaints filed today allege that the owners of these four sites violated their construction stormwater permits in similar ways: failing to design, install, and maintain proper stormwater controls; failing to conduct regular site inspections; failing to employ qualified personnel to conduct inspections; and failing to accurately report and address stormwater issues at the site. The complaints filed against AL Solar and American Falls Solar also allege unauthorized discharges of excess sediment from their construction sites to nearby waterways.

Construction at the Idaho and Alabama sites is now complete and permit coverage has been terminated. Therefore, these settlements only include civil penalties. The United States and the Alabama Department of Environmental Management (ADEM) filed a stipulation of settlement with AL Solar in the U.S. District Court for the Middle District of Alabama along with its complaint. Under that settlement, AL Solar will pay a $250,000 civil penalty to the United States and a $250,000 civil penalty to ADEM. A second stipulation of settlement involving American Falls was filed in the U.S. District Court for the District of Idaho. Under that settlement, American Falls will pay a civil penalty of $416,500 to the United States.

The consent decrees can be viewed at the Department of Justice website . .

This site uses Akismet to reduce spam. Learn how your comment data is processed.