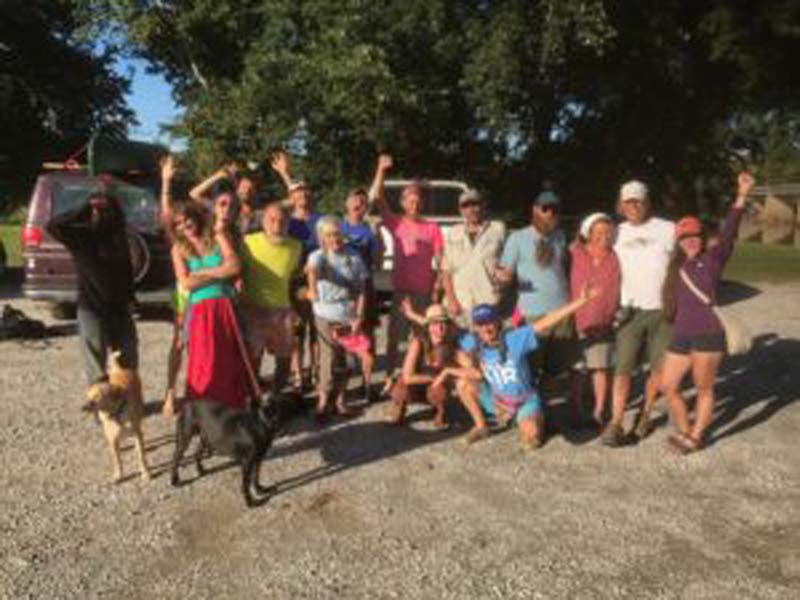 When Laney Sullivan first announced her plans to follow up on the 150 mile “Walking the Line into the Heart of Virginia”, with “Journey the James”, I took muted delight, as I was in recovery from Lyme’s. I had missed the Walk, not yet knowing I had Lyme’s, thinking I was simply exhausted from unrelenting front line pipeline activism. As the launch time grew closer, I was feeling stronger, I decided to put my bets on signing up. I have been canoeing since childhood, and had long wanted to do an overnight trip, yielding full time emersion/communion in River darshan. I emailed Freeman Allen to be my partner, a veteran of many a very long river paddle, fellow activist and seeker. He was thrilled. I could take a badly needed vacation and feel reeealy good about it!

A river venture AND with a cause! To bring media attention to our defense of the innocent and the vulnerable from the fracked gas 42” 600 mile Atlantic Coast Pipeline (ACP) with its dangerous impacts to millions of peoples, animals, flora, downstream and downwind. In the 3 years we’ve been fighting this greed-conceived project, (benefitting only the shareholders), we have proven there is no need for these pipelines as existing pipelines are available and underutilized. They would set a dangerous course towards locking into fossil fuels instead of renewables, accelerating runaway climate change. The emissions of the ACP alone would be the equivalent of 20 coal-fired power plants. The ratepayers would foot every dime of it, costing us 3 times more than for existing infrastructure. Madness. 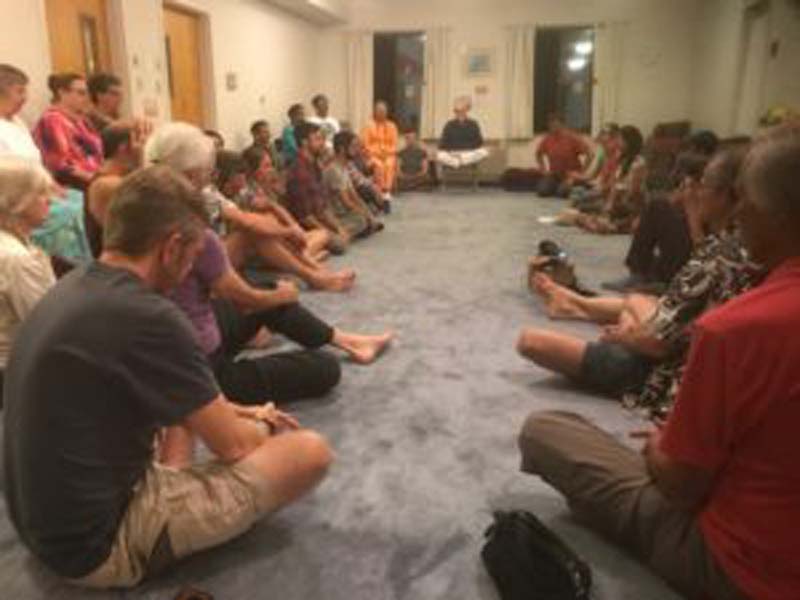 Laney considers Yogaville her spiritual home. Naturally, the launch spot would be at the most upstream location on Yogaville’s James River frontage, and immediately downstream from the proposed crossing for the ACP. Campers and boats arrived Sunday September 3, and we gathered in VVA classroom in the evening for pre-float briefings and sharing. Monday morning, after the first meal served up by the activist caterers, Seeds of Peace, (who follow activists around the country, feeding them onsite), packing us with lunches, we were blessed with prayer offerings from Dhyani Simonini in the Lenapé tradition; myself in the Wiccan tradition; and Swami Dayanandama gave us an arati river blessing with ghee lamp while up to her knees in the James, formerly the Powhatan River, or Waloha as Dhyani says the Monacans called her. This set the tone for the trip, all of us absorbing and quite moved by the blessings. 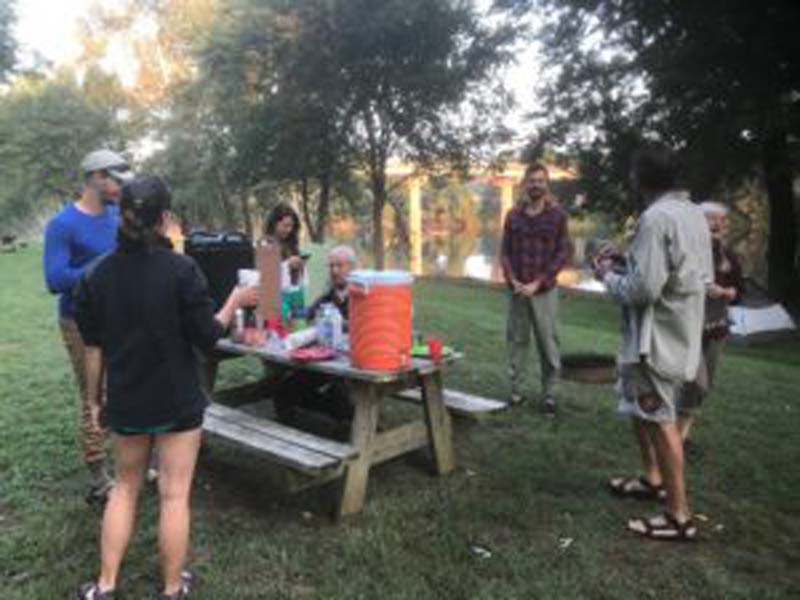 We were eleven kayaks and 2 canoes. Jai Ram Eyth, our local experienced river guide, kept us on track and the first day was18 miles to Scottsville, our first campground. The weather was perfect. Many were amazed that we could do that without blisters. We enjoyed numerous sightings of osprey, great blue herons and a few balds. The water was clear and cool. I got to enjoy many hours of hearing of Freeman’s extensive, extraordinary adventures around our globe. We arrived fatigued, with NBCTV Charlottesville waiting there to interview us, and gave favorable coverage. We were impressed, as we of Friends of Buckingham, could never get them to our public hearings in Buckingham. They actually didn’t know they were in Buckingham… 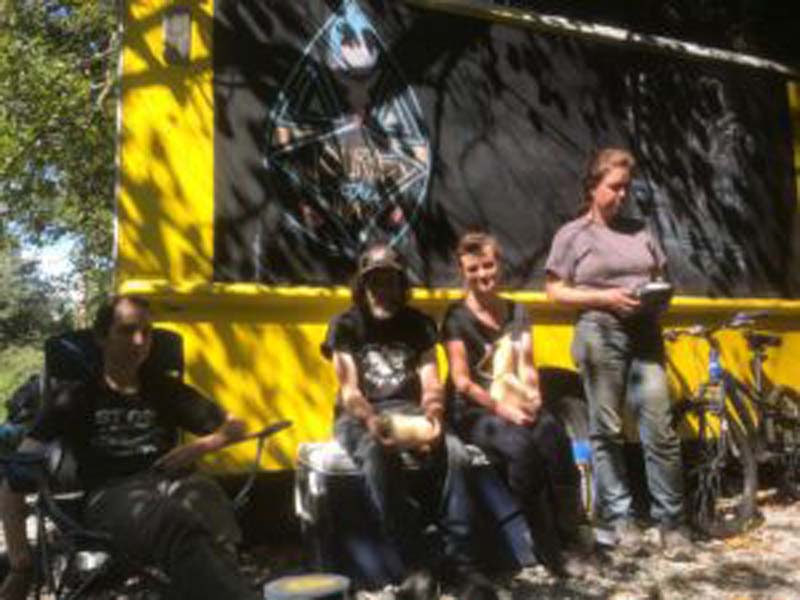 Seeds of Peace fed us well, as they caravanned to each campground. We were so well taken care of. We also had a support vehicle to carry our camping equipment, which was unexpected, but great, as the river had just enough water to not have to portage low areas. The benefit of a support van carrying our gear came with a problem though, which was only solved at the last minute by an act of Nature, or God… Our second night’s campground was 24 miles from Scottsville on an island inaccessible by Seeds of Peace. An option was to meet us at a boat ramp river crossing at about 20 miles.

When we got there, we were quite beat, the sun was going down and the wind was picking up – 40 mph, with lightening and rain. We ambivalently decided to camp there without permission, rather than risk the dangers. We hung out under the bridge, out of the weather, waiting for Seeds to arrive. Before that, a shiny black car pulled up with a gray haired man in a suit… Turns out, he asks us what we are up to. Laney responds that we are celebrating the James River. He says that he saw us on the news last night, that we were on his land and very welcome to camp there overnight, and by the way, when we get to Richmond, to put in a good word for them, as they were fighting a water pipeline which would draw water from across the river to deliver to Louisa County!!! Sad, but blessed were we!

The third day on the river was cold – 60’s with steady light morning rain. We had only 9 miles to go, destination the reserved Westview Methodist Retreat Center. We had a huge pavilion, big enough to set many tents under and Seeds could even pull in their van. A good thing, as it proceeded to pour all afternoon and night. Supportive friends brought firewood, and a nearby farmer gave us a barrel to burn the wood. While we waited for the support van, Seeds shared their extensive supply of used DRY shirts, that they had stenciled their logo on. Blessings abound. This day we were tasked with scripting letters to deliver at journey’s end to the Governor, Richmond mayor, DEQ, Dominion CEO and Director of Natural Resources.

Thursday, the fourth glorious morning, we finished those letters. We set out leisurely for Maidens landing, 14 miles downstream. We encountered a Canada goose that was injured, and floundering. We falteringly took her to the river’s edge with mixed feelings about how to best help. Sombering… I think this was also the day that we came across folks jumping off a 15-foot boulder and stopped to join them. Simple pleasures. We all felt so bonded by river, by each other, by righteous purpose, by social media that Laney steadily kept contact with throughout our journey. 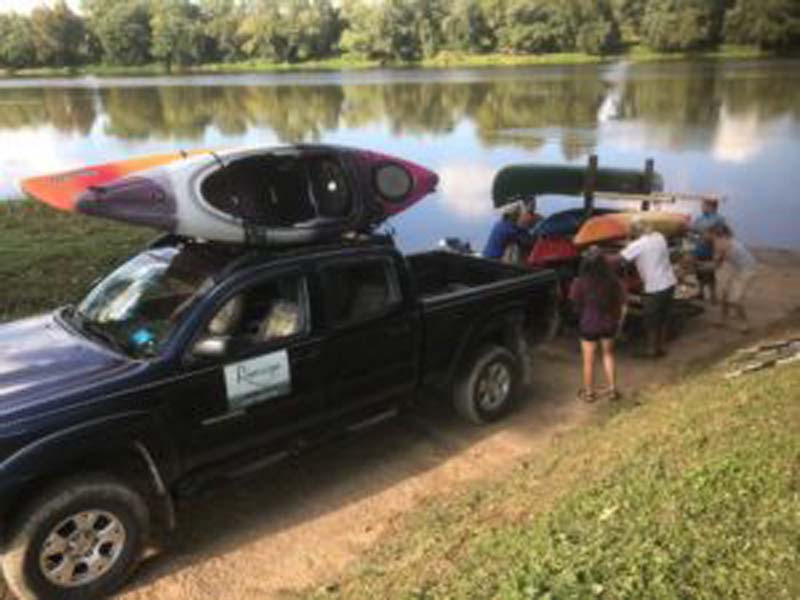 Most parted ways. Freeman, a few others, and I camped with Laney and Jameson at their Richmond collective. Friday we delivered our letters. Freeman and I took the DEQ and Tom Farrell, Dominion’s CEO. I was videoing Freeman on Dominion’s plaza when we were asked to leave! We asked if we could deliver a letter to Mr Farrell. “No” was the answer… Later that evening we gathered on the Potterfield Pedestrian Bridge to hang banners and be videoed by David Martin drone-videoed by Tom Burkett of the Virginia River Healers. More material for social media, spreading the good news of caring for our Mother Earth. The finale was an evening of sharing the journey and musical offerings by the many friends of Laney and Jameson. Jai! Laney for the inspiration and coordination of this nourishing, healing Journey the James for us ALL! Jai!!!