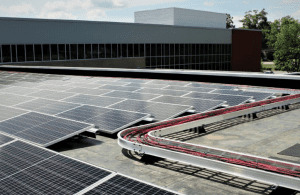 After a slow start, solar has been booming in Virginia.

From having zero large-scale solar farms in 2015, the commonwealth now has 51 in operation, with more than half found in the central and Southside regions. Distributed solar — which includes rooftop solar and small ground arrays that provide power at or near the place where it is used — has also seen a sharp increase. Installations have more than quintupled since 2017, with more than 26,000 in operation by the end of 2021.

As solar has mushroomed across the landscape, driven in large part by the 2020 Virginia Clean Economy Act, it’s also gotten more political. Solar is land-intensive, and the transition to a more decentralized energy system means that people and communities once largely insulated from energy production are now dealing with it in their backyards — often quite literally.

But as policymakers grapple with how to handle the solar boom, statewide information has often proved elusive.

“It felt like the information we were getting was piecemeal,” said Elizabeth Marshall, senior project coordinator of the Virginia Solar Initiative at the University of Virginia’s Weldon Cooper Center. “When we looked at the available data sources, each one gave us a snapshot. But it was really difficult to put the pieces together.”

Some in Southside feel overwhelmed by solar farms

Meanwhile, Southwest has yet to tap into its solar potential. 12 takeaways from the Virginia Solar Survey and other energy news.
Now it’s my turn to offer my takeaways, both from this report and other solar energy news, as viewed through the lens of the Southwest and Southside parts of the state that Cardinal News is set up to cover.