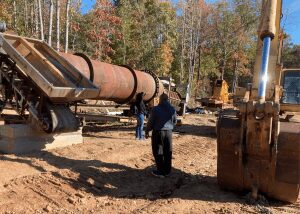 There are 447 documented abandoned gold mines in Virginia, and an estimated 500 undocumented, and they are all loaded with mercury, some with cyanide, arsenic, and other toxic materials. Many have numerous gaping and dangerous open shafts. There are some un-acknowledged superfund sites awaiting recognition. Our focus has been on stopping new industrial mining from getting started in Buckingham and Virginia. We would also like to see the existing mess cleaned up. This article includes:

Photo above: Recent visit to the Moss gold mine, Goochland County, VA

Mr Spears made this presentation to the 2022 Geological Society of America (GSA) convention in Denver. Check out the informative slide show produced by David Spears and Paul Busch.

Unreclaimed abandoned hard rock mine sites pose environmental and public safety hazards but are increasingly viewed as potential sources of metals and critical minerals. The Gold-pyrite belt of Virginia, USA, hosted hundreds of mines that were active in the 19th and 20th centuries; all were abandoned before implementation of modern reclamation laws. These sites continue to contaminate waterways and cause problems for landowners and developers.
The densest concentration of abandoned gold mines is in western Goochland County, where Ordovician-age gold-bearing quartzite and schist of the uppermost Chopawamsic Formation are folded into an asymmetric synform. One of these, the Moss Mine, originally operated from 1836 – 1838 and from 1893-1936. Development included two inclined shafts, drifts at several levels, a jaw crusher, stamp mills, and gravity separation equipment. Final processing of the ore involved amalgamation of fine gold using mercury, much of which ended up in tailings, where it remained for decades. In the 1990s, waste piles were subject to rudimentary reclamation efforts, during which the material was spread over an acre or more. One small mining operation is now reclaiming the site and recovering gold, lead, and mercury.
Reprocessing of the old tailings begins with a reverse helix trommel to wash the soil and separate it from rock. The slurry from the trommel goes to a sluice to separate the larger particles of dense metals, then to gravity separation jigs. Rock goes to an impact crusher, from which fines go to the gravity separation jigs; coarser material is returned to the crusher. The jigs catch gold, lead, and mercury along with other dense fines; this material is then pumped to a wave table that further concentrates the metals. Mercury is retorted from the concentrate, then condensed and sent to a recycling facility.
In addition to the environmental benefit of removing mercury, fine gold amalgamated with mercury is being recovered. The potential for recovery of valuable metals may provide adequate incentive for private industry to reclaim some sites, but the need is much greater than current industry interest. A comprehensive inventory of legacy sites, mapping and analysis of associated waste, cooperation of regulators, and additional financial incentives would facilitate remediation efforts.

Check out the presentation HERE.

In 2022, The Piedmont Environmental Council was proud to partner with student volunteers from UVA’s Clark Scholars program on a project to analyze the status of former gold mine sites throughout the Commonwealth. Using data pulled from the Virginia Department of Energy’, including its Mineral Mining online mapping interface, the students’ research enabled PEC to produce the new WebMap embedded below. Our interactive map shows the location of former gold mine sites in Virginia, and importantly, visually displays each mine site’s “OLAC ranking,” a measure of prioritization for reclamation based on site assessments and potential contamination (red corresponds to the highest priority for cleanup). 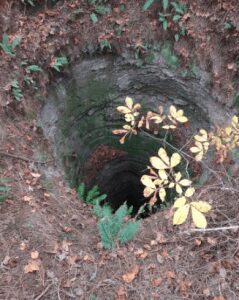 Cleaning up existing toxic contaminations from the many abandoned gold mines in Virginia needs to be well understood, and for actions to be taken. Care must be taken in making new laws and regulations for new metallic mining, to allow for and promote re-mining and reclamation in an effective and safe way. Read public comments HERE, submitted to the State Agency Committee on the study of the impacts of gold mining on Virginia. October 28, 2022.

Significant effort was made to update coastlines along the Chesapeake Bay and inland rivers. These boundaries served as contacts for both the surficial units and bedrock units, and contributed to database topology. In the Coastal Plain Province, east of the Fall Zone, some surficial deposits also serve as map units on the bedrock geologic map (e.g. Miocene/Pliocene-aged terrace deposits). Whenever possible, surficial Coastal Plain units were migrated from geologic map unit polygons to surficial map units, exposing older bedrock units underneath in the final iteration of the bedrock polygons. Along with the statewide geologic map, the surficial geologic map is currently in review. Virginia Energy will publish these finalized datasets as part of our digital web map services in 2023.

Check out the presentation HERE.