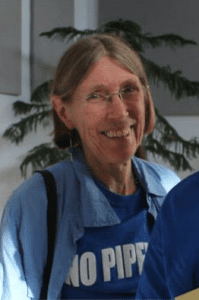 Thanks to Friends of Nelson, and specifically Ellen Bouton, an archives project of the Atlantic Coast Pipeline saga was started in the fall of 2020. Once the project was organized, Friends of Buckingham was invited to join. This article is the story of this project.

I asked Ellen for her bio:  She has been the archivist at National Radio Astronomy Observatory since 2003 (and was their librarian many years before that); was the Web manager for Friends of Nelson 2014-2020; and was on the Friends of Nelson Board 2018-2020.  “My husband, Ron Enders, and I got the original May 2014 Dominion letter, and our property was on the very first iteration of the route that came over Afton Mountain and through Afton in the northern tip of Nelson County, before Dominion shifted the route south to cross the Blue Ridge at Reed’s Gap.”

“…Shortly after the ACP was canceled, I began to think about archiving records of the fight against the pipeline.  We grassroots folks, along with the good folks at SELC (Southern Environmental Law Center) and ApplMAD (Appalachian Mountain Advocates), defeated a major corporation which had always had whatever it desired, and that was a truly remarkable accomplishment.

In addition to being on the Friends of Nelson Board (and serving as FoN Web page person), I am a professional archivist.  At my request, in the Fall of 2020 the FoN Board agreed to support an archiving project.  We formed an Archives Committee, with me as chair, and members Woody Greenberg, Jill Averitt, plus Nancy Sorrells from Augusta County.

I wrote to the Library of Virginia (which includes archives), told them FoN wanted to archive documents, photos and other materials from our successful fight against the ACP, and hoped the Library of Virginia would accept the collection, believing it would be useful to historians, sociologists, and citizen groups fighting similar battles.  The Library enthusiastically accepted our offer of the organized and archived materials once the project is complete.

The Friends of Nelson Board purchased cloud space through Starchive (https://www.starchive.io/), a digital assets management company based in Nelson County whose founder was a leader in the fight against the ACP (Richard Averitt’s company, so the pipeline archive is important to them!). We’ve uploaded and organized all the digital material there that will be transferred to the Library of Virginia.

Now, a bit over a year later, I have almost completed gathering and organizing not just Friends of Nelson materials, but also a broader range of things, e.g. ABRA Updates, Pipeline CSI maps, all the ACP-related legal materials from SELC and Appalachian Mountain Advocates, and more.  We have 111 GB of digital materials on Starchive, plus several banker boxes of paper material.

After Thanksgiving, I will be working with Nancy Sorrells to incorporate the ~47 GB of material she’s gathered from Augusta, along with some from Highland and Bath.

And then there is Buckingham.  When I started this project in October 2020, I knew that just focusing on Nelson was going to be a major and time-consuming project (it has been!).  While I knew that any records of pipeline resistance would be incomplete without Buckingham, the prospect of adding Buckingham materials was at the time, quite honestly, overwhelming.  Now that I’ve gone through the process of gathering and organizing and creating a structure for what we have, adding Buckingham seems less daunting and more important.

Would you be willing to pull together Buckingham-related documentation to add to the collection?  Compressor station, environmental justice, Union Hill – it all happened on your turf.  If there are others you worked with who could/would contribute materials to the collection, that would be great.  This is a big ask, but, both as an ACP fighter and as an archivist, I think it is really important that the records not be lost.  I’m happy discuss it further and to answer any questions you may have.

To give you a sense of what we have already and how it is organized, I’ve attached the current draft of the finding aid.  A finding aid is what all archives use to describe collections so that researchers know what is in the collection.  Looking through the finding aid will give you a good sense of what will be of interest.  The yellow highlights designate changes I need to make, questions to myself, or, in a few cases, information the Library of Virginia will need to provide.

I’m grateful for everything Buckingham did to fight the ACP.  I hope you will join in preserving the records of our astounding win – even a year and a half later I’m still astounded!”

This project is called the
Western and Central Virginia Resistance to
the Atlantic Coast Pipeline, 2014-2022.

The Finding Aid to the Records includes this history:

In fall 2020, the Friends of Nelson County Board decided it was important to document the defeat by a grass roots citizens group and its allies of a planned project backed by two large and well-funded private corporations, including one of the largest and most powerful corporations in Virginia, believing the collection would be of value to researchers interested in local, state, and regional history, in public policy, in corporate policy, in environmental issues, in environmental justice issues, and in property rights issues, as well as to ordinary citizens who might suddenly be thrust into their own David vs Goliath fight with a large corporation.

Check out this list of FoB video recordings here. This is not a complete list; more videos were uploaded to FoB files on the ACP Archives. There is some overlap between this list and what was uploaded to the ACP Starchives to FoB files.

Heidi Dhivya Berthoud uploaded 1,510 FoB digital files to Starchives – mostly photos and videos – 16.63 GB! This list of YouTube videos (2016-2022) was included in the combined list for All ACP videos, and as a separate file included with Friends of Buckingham materials.

Ellen reports the wrap up target date for submitting all materials to the Library of Virginia is late June 2022. She expects we will have 150-175 GB (yes, gigabytes) of digital data of all kinds, along with ~ 6 banker boxes of paper files to hand over to the Library, where the archives will be housed.

Again, thanks to Ellen Bouton, and Friends of Nelson for their stellar leadership in this epic battle/journey. We know the benefits ripple out into the universe.