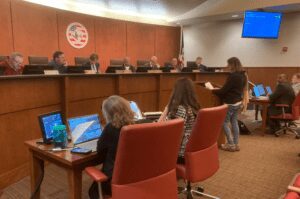 Thanks to Haris Lender for speaking up!

On December 2, the State Agency Committee (SAC), tasked with the study of large-scale gold mining and the industry’s potential impacts on communities and their watersheds in Virginia released its public report “Potential Impacts of Gold Mining and Processing in the Commonwealth.” The report details the potentially destructive effects of large-scale gold mining and its toxic waste production: “As the James River is only two miles away from the site where gold prospecting has occurred

and serves nearly 2.7 million Virginians, there is a threat to the public health of those living in Buckingham County as well as those residents living in other geographical regions in the state…”

“Virginia currently does not have specific regulatory requirements for many of the chemicals used in gold mining and processing operations, including cyanide.”

The SAC final report (24 pages) was a requirement of HB2213, sponsored by Delegate Elizabeth Guzman. It includes 173 public comments beginning on page 25. The study by the National Academies of Sciences, Engineering and Medicine (NASEM) begins on page 67. The total report is 294 pages.

Below are a number of articles related to the review of that study.

Brian Carlton, editor of the Farmville Herald covers the December 12 Buckingham Supervisor meeting, where our public comment addressed the study, thanking Supervisor Bryant for proposing a committee to review the study, encouraging the Board to approve that, and get on with making protections for the county. Read the editorial here, posted December 14. Brian quotes from 3 Buckingham residents: Haris Lender, Gerry Sackett and John Laury. Thanks to all for speaking up!

Recording of Buckingham Board of Supervisors meeting on December 12 is posted on YouTube here. Our stellar public comments begin at 21 minutes with Santoshi and Gracie Young. The Decision to create a committee to review the report starts at 1:46:25.

The Bay Journal publishes on December 5, 2022: “Report: Virginia ill-equipped to deal with the revival of gold mine industry.”