Mr Barlow goes to Kershaw, SC, home to the Haile open pit gold mine, to meet the neighbors

I drove to Kershaw, South Carolina, on October 28, 2020, where the Haile Gold Mine is located, and spent three days there to find out how the gold mining industry had impacted the town. The mine, owned by the Australian company OceanaGold, had been in full operation for three years. I wanted to talk to local residents about their views of having such a large open pit mining operation next to their town.

As I approached the town, I passed by the main entrance to the Haile mine and for the next few miles, just through the pine trees, I saw huge forty-foot berms of tailings extending for miles. Once in the town of Kershaw, I noticed it was very similar to the town of Dillwyn in many ways. In Kershaw, they have a prison and a railway-fed soybean distribution/ processing plant as opposed to Buckingham’s prison, timber and kyanite and slate mining. It’s a small town within a rural, poor area with few food options, most consisting of mom and pop-type restaurants. The roads were in disrepair and their only grocery store was an IGA that was a defunct building with leaking ceilings, puddles of brown water within the isles and missing many of it’s ceiling tiles within the store. The two motels in town were in disrepair and almost uninhabitable. I stayed at the Executive Inn, the newer and nicer hotel as I was told, for two nights in a room with torn wallpaper, heavily stained carpets a broken telephone and crumbling lamp shades. Boarded up old store fronts took up at least 25% of the buildings downtown.

Of the residents I spoke with, most said the mine was a good thing for their area. They touted the increase in business the mine employees brought to the town as far as fuel and food sales, lodging, etc. When asked about the environmental risks and impact that a mine operation imposed, most were not concerned and trusted the mine’s management of it’s toxic waste. The Haile mine has expanded recently and now has at least four tailings ponds throughout it’s excavation sites, one as big as 600 acres. 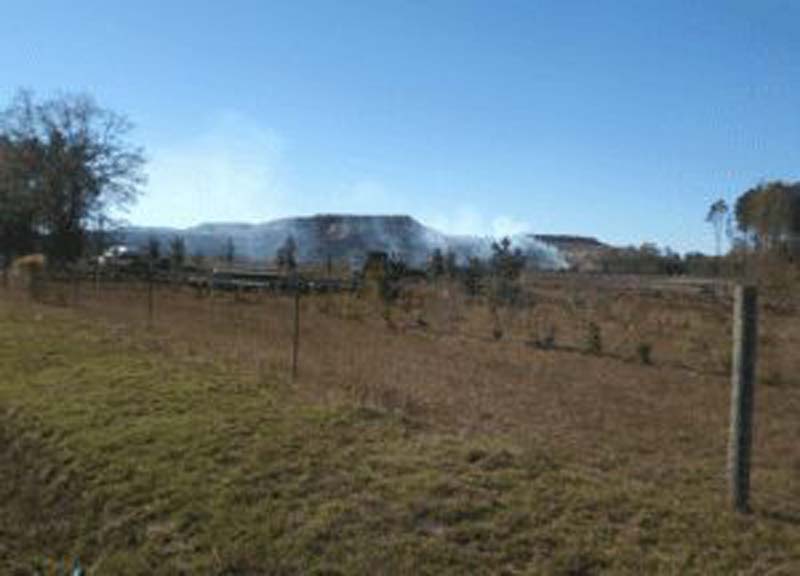 I visited the fire department on the main street and asked if the mine had contributed any additional equipment to the department since they are only a few miles from the mine and would probably be first responders in an emergency. The head fireman told me they had received a new laptop from them, only after requesting it. When asked about the acquisition of land by the mining company, he told me that he, himself sold three acres to the mine and was happy about the price he was paid. He and his wife then relocated to another area away from the mine. He said the mine operates around the clock, so anyone living near it didn’t like it at first but now have no choice but to deal with it and get used to it’s constant rumblings and blasting.

The local library has to be relocated because OceanaGold wants to acquire both the library and it’s adjacent county government building, for a mine training center. In exchange, the Haile mine will build a new EMS station near the mine site. To pay for the new library, which is going to be a located in an old, vacant Wells Fargo bank branch, the local residents voted for a tax increase to pay for the town purchasing and renovating the building. This new location is much smaller than the current library’s size. I realized then and there that a mine company who arrives and disrupts so many lives does not shower the surrounding localities with gifts and civic revitalization.

The mine pays $15.00 an hour to workers. That increases if you are a geologist or heavy equipment operator. There is a problem employing local workers because of wide-spread use of illegal drugs in the area. Drug testing is used in the mining industry non-stop for safety reasons. To compensate for the deficit of local workers, the mine hires workers from outside the local area who, in turn, need housing. The real estate market for rentals and houses for sale in the area is very good.

When the mine was opening, the local jobs of clearing the land and cutting in roads for the operation were plentiful but short-lived. Local real estate agents quickly bought up any land within the mine’s expansion zone only to resell to the mine later for a profit. Some locals held out for more money than the mine offered only to have their land fenced off and the mine operate around them.

I could not find information regarding the tax revenues being paid to the county of Lancaster nor the town of Kershaw. The public buildings were all closed during the pandemic. The Haile mine produces 135,000 ounces of gold per year. Estimated value @ 2,000 oz. is 270,000,000.

Paul Barlow is a retired electronics technician from the Fredericksburg, Virginia area who moved to Buckingham county in 2012. Along with his wife Grace, they live two miles from the Aston Bay main drilling site.  Paul and Grace are both active with Historic Buckingham, Inc. and the Buckingham Branch library where Grace works as a librarian.