Piling on: Fresh off a pipeline win, a rural Virginia community now faces the threat of gold mining 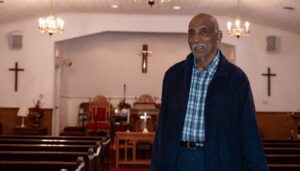 Some members of the Buckingham County community who helped fight the Atlantic Coast Pipeline are being forced to take on industrial metals mining
Residents of rural Virginia communities now recognized internationally for winning an unprecedented battle against the Atlantic Coast Pipeline and its polluting compressor station in 2020 barely had time to celebrate their historic victory before new environmental justice concerns emerged.

Ruby Laury of the Union Hill community says, “It was like deja vu,” upon learning a Canadian company was conducting exploratory drilling for gold in nearby and beloved Buckingham County forestland.

Aston Bay Holdings Ltd., a mineral exploration company, started exploring for gold in Buckingham in 2019 and has since expanded its search for metals into additional areas of Virginia. While the last gold-producing mine in Virginia closed in 1947, the environmental and public health impacts from gold mines in the U.S. are well known and widely reported.