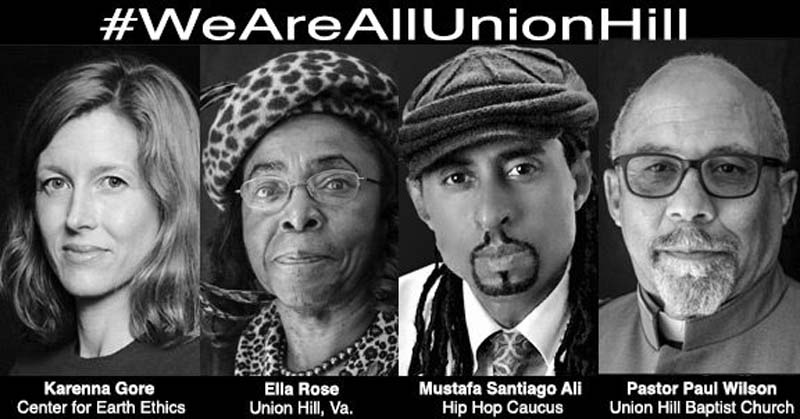 Residents of Union Hill and their allies have garnered more than 150 additional signatures from supporters across the country on a letter to the State Air Pollution Control Board urging rejection of the proposed permit for a massive natural gas compressor station in this predominantly African-American community in rural Buckingham Co., Va.

The signatories total 260, including 100 people on the original letter from Friends of Buckingham to the air board last week, prior to the board’s December 10 meeting, which was rescheduled to Wednesday, December 19, due to weather. The original signatories include Karenna Gore, director of the Center for Earth Ethics, Tim Guinee, actor and chair of the Climate Reality Hudson Valley Chapter, Mustafa Santiago Ali of the Hip Hop Caucus, and actors Don Cheadle and Ed Begley, Jr.

Over the last week, the group’s fight to oppose the massive compressor station has been widely shared and supported on social media with the hashtag #WeAreAllUnionHill, including a Tweet from Vice President Al Gore. Given the social media following of the environmental justice and climate leaders supporting the Union Hill community, organizers estimate the issue has reached millions of Americans. The compressor station is part of the 600-mile fracked-gas Atlantic Coast Pipeline being proposed by Dominion Energy.

The letter — sent by Pastor Paul Wilson, Union Hill Union Grove Baptist Church, Chad Oba, president of Friends of Buckingham, and Lakshmi Fjord, anthropologist and Union Hill historian —  notes that the potential siting of a massive industrial, polluting facility in this community exemplifies a systemic pattern of environmental racism that occurs in low-income communities of color across the country. It cites research by Fjord that 600% more people live in Union Hill than recently reported by Dominion to the air board, and that 83% are minorities, mostly of African descent.

The signers call out Virginia Governor Ralph Northam and his administration for recent actions to interfere with the decision-making process of the air board, which is charged with making independent evaluations and decisions to ensure the public interest is prioritized over private corporate interests. Many of the social media posts have tagged Gov. Northam.

The letter urges the board to allow the public to speak at its December 19 meeting, before any vote on the permit is taken, and to deny the permit. Their letter concludes: “The legacy of placing toxic facilities in places where they disproportionately affect poor communities of color is unjust and unacceptable and needs acute examination. It is not right to look the other way while this continues.”

NOTE: On Tuesday, December 18, a broad coalition of interfaith, environmental justice and other groups is holding a nighttime vigil in Richmond opposing the compressor station.